Lynch syndrome (also know as hereditary nonpolyposis colorectal cancer or HNPCC) is a hereditary predisposition to colorectal cancer, as well as gastric, urinary tract, heptobiliary, skin, pancreatic, and brain cancers, in addition to breast, ovarian, and endometrial cancers in women. 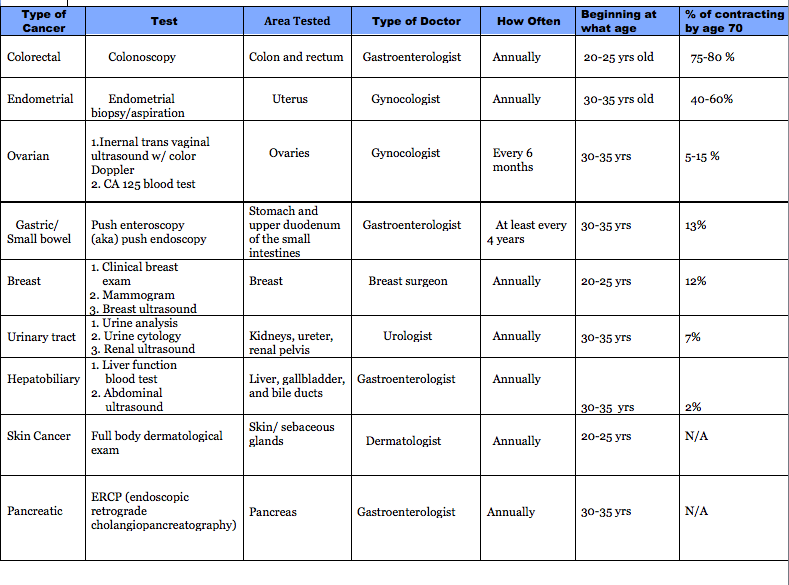 Lynch syndrome is caused by a mutation of one of the following mismatch repair genes: MLH1, MSH2, MSH6, or PMS2. The identification of these genes has led to large numbers of families affected with Lynch syndrome, but there are possibly more genes that can cause Lynch syndrome.

The genes associated with Lynch syndrome are normally responsible for correcting mistakes in DNA. With cell division, its not uncommon for mistakes to happen. Usually, normal cells have mechanisms to recognize these mistakes and repair them, but persons with the Lynch syndrome associated genes lack the ability to repair minor mistakes. A buildup of these mistakes leads to the increasing genetic damage within cells and can eventually lead to cancer.

Lynch syndrome is passed down in an autosomal dominant inheritance pattern, there is a 50% chance that a person with Lynch syndrome will pass the mutation to each of their children. Lynch syndrome can be passed on by mother or father and does not skip generations.  In rare instances, both parents can pass the syndrome onto their offspring, causing childhood occurance of cancers.

What tests determine if you have Lynch syndrome?

Your family history can help identify if your family is likely to have Lynch syndrome and if further evaluation is needed.

Your doctor may refer you for further Lynch syndrome evaluation if you have:

• 3 or more relatives with a Lynch syndrome related cancer

• 1 or more relatives diagnosed before the age of 50

• 1 should be a first-degree relative

If you or someone in your family have been diagnosed with cancer, special testing can be done to determine whether the tumor has characteristics of Lynch syndrome cancers. Cells from a colon cancer and possibly other tumors can be used for tumor testing.

Imunohistochemistry (IHC) testing and Microsatellite instability (MSI) test are two of the tests that may be used in tumor testing.

Donating online is as easy as ever. We accept donations via PayPal. To make a donation, click the link below.

Check it Out
Romeo